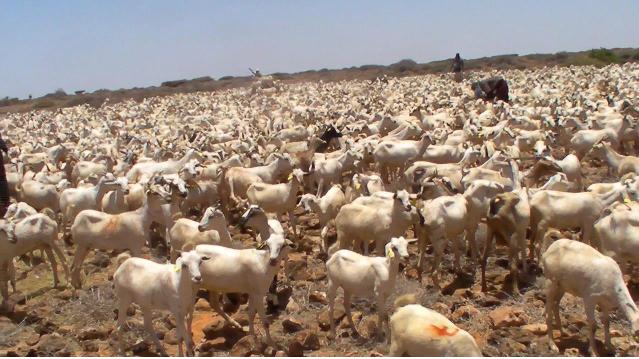 The November 2013 cyclone that struck Nugal and Bari regions of Puntland was followed by an aerial assessment conducted by the United Nations which became a basis for the design of a project by FAO – Somalia office to respond to the effects of the cyclone, specifically on livelihoods. The project titled “Distribution of productive animals in Nugal and Bari regions of Puntland” developed by FAO was implemented by four local agencies namely: Kaalo Aid and Development (Kaalo), Puntland Livestock Professional Association (PULPA), Ministry of Livestock and Animal Husbandry (MoLAH), and Shakir Company.

The project’s outcome was that: 500 households from cyclone affected vulnerable communities in Nugal and Bari regions received 12,500 productive goats, with each household getting Twenty Five (25) productive goats to rebuild their livelihoods.

Project started in June 2014 and was implemented in stages. The first stage involved community mobilization in which Ministry of Livestock and Animal Husbandry (MoLAH) identified vulnerable cyclone affected beneficiaries and compiled a list which was verified by other relevant implementing agencies. This was followed by three phases of livestock distribution. In the first phase, 4,750 goats were distributed to 190 households in Eyl district. During the second phase, 5,250 goats were given to 210 households in Dangoranyo district whilst the third phase saw 100 households receive 2,500 goats in Bander bayla district.

The livestock distribution exercises were witnessed by officials from different stakeholders including vice president, and ministries including the Ministry of Livestock and Animal Husbandry (MoLAH) Ministry of Interior, Mayor’s offices, and security agencies. Other officials who witnessed the distribution include officials from project implementing agencies, the community leaders – the traditional elders, religious leaders and the village committees members.

This document serves as the final report for the project entitled “Distribution of productive animals in Nugal and Bari regions of Puntland” Kaalo has been implementing in collaboration with Puntland Livestock Professional Association (PULPA), Ministry of Livestock and Animal Husbandry, and Shakir Company. The report is based on four project progress reports submitted to FAO in the process of project implementation. Kaalo’s mandate in the project involved the distribution of the already purchased 12, 500 productive goats to 500 households, each entitled to 25 animals. The project was funded by Food and Agriculture Organization of the United Nations (FAO) – Somalia office. The project was aimed at supporting the distribution of productive animals to contribute to the household subsistence and economy as well as the rebuilding of the critical nuclear herd of livestock in the cyclone affected districts of Dangorayo, Eyl and Bendarbayla in Nugal and Bari regions of Puntland. The project began on June 26th, 2014 upon signing of the Letter of Agreement (LoA, 54/2014) and ended on 15th October 2014 upon completion of the last phase of the livestock distribution.

This document therefore serves as the final and end of project report and it outlines the process that Kaalo went through in executing its mandate in the project from the start to the end.

On 10th November 2013, a tropical cyclone hit the North-Eastern coast of Puntland. Puntland is situated in the north eastern part of the country. The region is bordered by the Somaliland region to its west, the Gulf of Aden in the north, the Indian Ocean in the southeast, the central Galmudug region in the south, and Ethiopia in the southwest.

The region was struck by a tropical cyclone in November 2013 in the regions of Bari and Nugal. Five days later, on 15th November 2013, the United Nations (UNOCHA) Somalia Office conducted an initial aerial assessment of the most affected regions. The assessment results revealed that the devastating effects of the cyclone were much registered in the districts Dangoranyo and Eyl in Nugal region and Banderbayla in Bari region. The results of the assessment also revealed that a number of households lost property and their source of livelihoods, especially livestock. People lost lives, families lost homes, and household assets including fishing boats and businesses. It created flash floods and heavy rainfall mainly affecting the districts of Eyl, Bendar bayla, Dangoranyo, Jariban, Garowe, Iskushuban, Allula, Las Qoray, and Kandala. Over the next 24 hours after the cyclone, Puntland authorities declared a state of emergency and announced that the storm may have killed 100 people and wiped out thousands of livestock.

Based on that UN initial assessment, Food and Agricultural Organization of the United Nations (FAO) designed a project to respond to the effects of the cyclone aiming at rebuilding the livelihoods of the affected households and promote the right to food. The project was set to start in June 2014.

The outcome of the project

The project was implemented using partnerships and participatory methodologies. The FAO decided to engage four of its local Puntland partners to take lead the implementation of the project. The agencies include: Kaalo Aid and Development (Kaalo), Puntland Livestock Professionals Association (PULPA), Ministry of Livestock and Animal Husbandary (MoLAH), and Shakir Company. These partners ensured proper coordination among them and adequate participation of the beneficiary communities at every stage of project implementation.

The project began with mobilisation of the beneficiary communities in 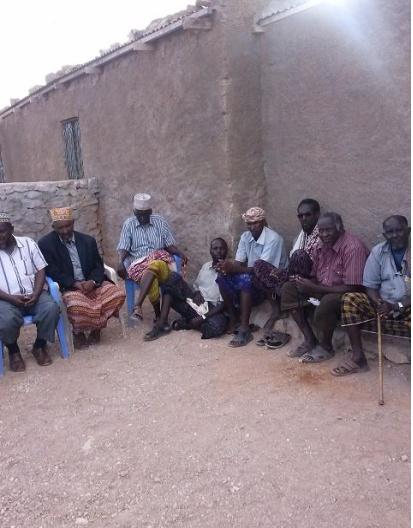 which the project was introduced to the community stakeholders. This was done under a collaborative arrangement of the implementing agencies. On 19th Augst, 2014 the team composed of two persons from Puntland Livestock Profesional Association (PULPA), one person from Kaalo, and two from Puntland Ministry of Livestock and Animal Husbandry  (MoLAH) went to project targeted districts namely: Eyl, Dangorayo, and Bendarbeyla to meet with the community stakeholders. The team held meetings with the key stakeholders (Mayors, tradtional leaders, leaders of beneficiaries, etc) in each district in which they shared information about what the project was aiming to achieve, project outcomes, and activities. They also shared the lists of the beneficiaries for each district which had been prepared by the Minsitry of Livestock and Animal Hunsbandry for further verifications. The following community mobilisation meetings were conducted:

goats to 100 households on 1st and 15th October, 2014 respectively. All the three phases saw all the planned 12,500 goats having been distributed to 500 households in the targeted regions of Nugal and Bari.

The table below shows number of goats distributed, beneficiaries, districts, and dates

Each livestock distribution phase, on the distribution date, began with an opening ceremony attended by different dignitaries particularly from relevant government ministries, security agencies, local community leadership, officials from the project implementing agencies, and beneficiary communities. The launch and opening ceremonies were organised by the implementing partners in collaboration with community leaders including the traditional Sultans, the village local leaders, and religious leaders.

The Puntland Vice President, Mr. Abdihakin Haji, attended the first and the second phase opening ceremonies. In his key note address at these ceremonies, the Vice President expressed gratitude to FAO for having remembered to support the Puntland people caught up in the cyclone disaster. He also thanked the management of Kaalo for employing excellent methods in animal distribution exercise and all other stakeholders that were involved in making the project a success. However, he cautioned the beneficiaries that they need not to sell animals they were to receive because they are meant to sustainably rebuild their livelihoods destroyed by the cyclone.

Like the Vice President, during his opening remarks, the Mayor of Bedarbeyla expressed his happiness and inner most thanks to FAO for proving the project funds and project implementing agencies (Kaalo, PULPA, MoLAH and Shakir) for successfully implementing the project supporting the cyclone affected people in his district. He advised the beneficiaries to sustain the goats given to them as a livelihood for food and income security.

The actual distribution process of livestock (goats) for all the three phases always began with Puntland Livestock Professional Associations (PULPA)’s completion of the vaccination/treatment of all the animals for a particular phase. Kaalo would thereafter send the project team to visit the PULPA withholding kraal prior to the distribution date to take stock of the animals vaccinated, understand their conditions and confirm the distribution date.

In the early morning of every distribution day, Kaalo’s team could count goats destined to be distributed for that particular phase and officially received them from PULPA and distribute them to the number of household identified to receive on that day and phase. Depending on the number of households, Kaalo divided them into groups in order to support each other in moving their goats to their respective destinations. This was to make it easy for them to share the security provided by the escorts organized by Kaalo. Escorts safeguarded goats of beneficiaries from any animosity that could be emerge from the crowd of people that gathered at the distribution site.

It should be noted that in each phase, many cyclone affected community members gathered in big numbers at the distribution site, and community elders of the affected areas convene a meeting of all beneficiaries on the list. In this meeting, beneficiary households on the Ministry list were convinced to each relinquish number of goats that would be given to those vulnerable persons not on the list. The real beneficiaries on the list agreed to their elders’ suggestion. Based on that decision, more than another 500 identified as vulnerable persons benefited indirectly. The number relinquished in each site were as; Eyl 3 goats, Dangoranyo 5 goats, and Banderbayla 5 goats from each beneficiary in the list. This promoted solidarity in the beneficiary communities.

In this case KAALO was invited at the distribution center meeting where by the elders of the cyclone effected communities and the beneficiaries came together and declared publicly that they have agreed to relinquish an agreed number from each household for the other cyclone effected community members that have not been in the beneficiaries list, it was purely a traditional issue in which the whole community members have agreed. It should also be noted that it would be very difficult for the distribution to be made without the full support of the community elders whose consultations has led to the successful completion of the project.

The following were some of the challenges Kaalo met during the livestock distribution exercises: