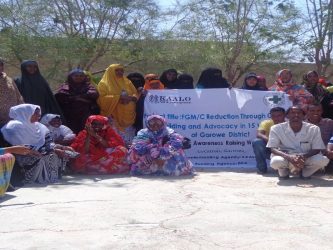 1. Developments in the country of relevance to the implementation of the project

The project of FGM/C Reduction through capacity building, Awareness Raising and Advocacy in 15 villages in Garowe District of Puntland State of Somalia is currently being implemented by KAALO Aid and Development in partnership with Danish People’s Aid. The project aims to contribute towards the abandonment of FGM/C in Nugaal region.

KAALO is a local Non-governmental organization always involved in different projects including protection projects and always committed to partner with Humanitarian and Development agencies both National and International organizations.

This report covers a period of one month, in this period the project has executed among other activities:   training of 49 persons in Garowe town for the 7 villages of Garowe  which is well done , those 49 persons were from youths, religious leaders , traditional leaders ,mothers,  fathers ,  practitioners , every was happy and promise to take the message .

The objective of the project is to bring about change in the knowledge and attitude to FGM in the primary stakeholder group (15 villages) through a variety of means ranging from drama performance, radio programs, educational films, workshops, discussion forums, and to create societal debate in Puntland State about FGM/C. 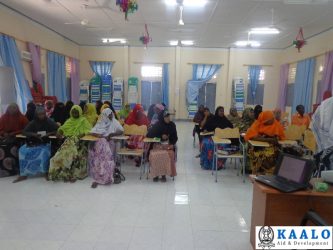 Female Genital Mutilation (FGM) is very common in Somalia. More than 90 percent of girls in Somalia are subjected to the most severe form, i.e. infibulations. Factors such as religion, tradition and sexuality are used to explain and justify the practice of genital mutilation. While awareness campaigns and other efforts towards its eradication encourage changes to the practice, these have come about only at a very slow pace. Although women are accountable for upholding the practice, men carry a great responsibility. In societies where socio-economic security is provided for women primarily through the institution of marriage, the requirement that women must be virgins to be considered eligible for marriage contributes to a continuation of the practice of FGM/C.

In Somalia, genital mutilation is not a rite of passage that marks the transition from child to adult. The practice is linked to tradition and notions about purity, virginity and control of unwanted sexuality.

In Puntland, people still practice FGM/C, even though some awareness and capacity building workshops were conducted by agencies involved in the field of protection. The toll of the practice is not as it was in 1990s. The awareness campaign conducted before has in one way or another raised the knowledge of the people on FGM/C but not as expected.

KAALO has in the previous year conducted a pilot project in Wabari village of Garowe district; this village has been indentified to be having high prevalence of FGM/C practice. Awareness workshops were conducted so as to raise people’s knowledge on FGM/C. the pilot project showed some success in changing the attitude and practice of people towards FGM/C.

A further 10,000 people will be indirectly affected through radio discussion and broadcasting reaching all of Puntland

This was the main activity in the month of October; The Awareness raising workshop and advocacy lasted for five days. The Awareness workshop  has taken place at Puntland State University Multi-purpose Hall on 31st of  October  Prior to the  workshop, the  facilitetor  prepared the meeting schedule and people supposed to present something before the participants. The ceremony was opened with the recitation of prayer verses and afterwards given to  FGM project cordinator  to welcome the participants and officially open the workshop.

Below are some of the Aims of the workshop in terms of increasing communities eradicating FGM/C practice in Nugaal region.

This summary report presents an update of the end month of November. 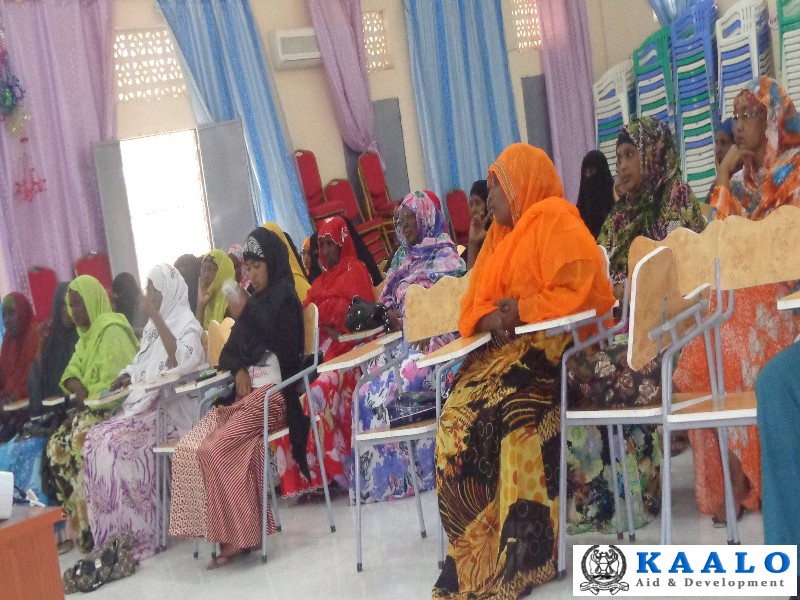 Training has also been provided through the plan   to health professionals,

Varies from generic information on FGM, to media training, to leadership and to all villages 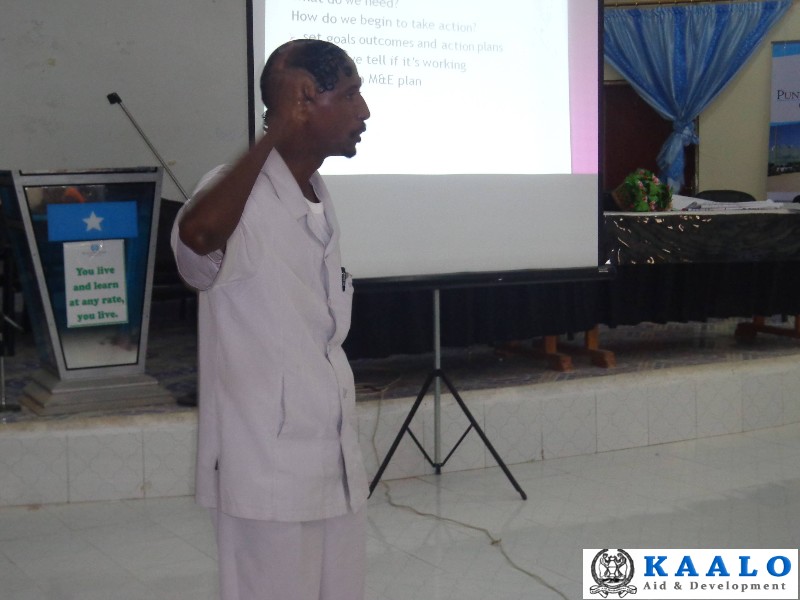 3. Status for objectives and indicators

Comparison of planned and actual accomplishment

·         Capacity building for community leaders to advocate against FGM 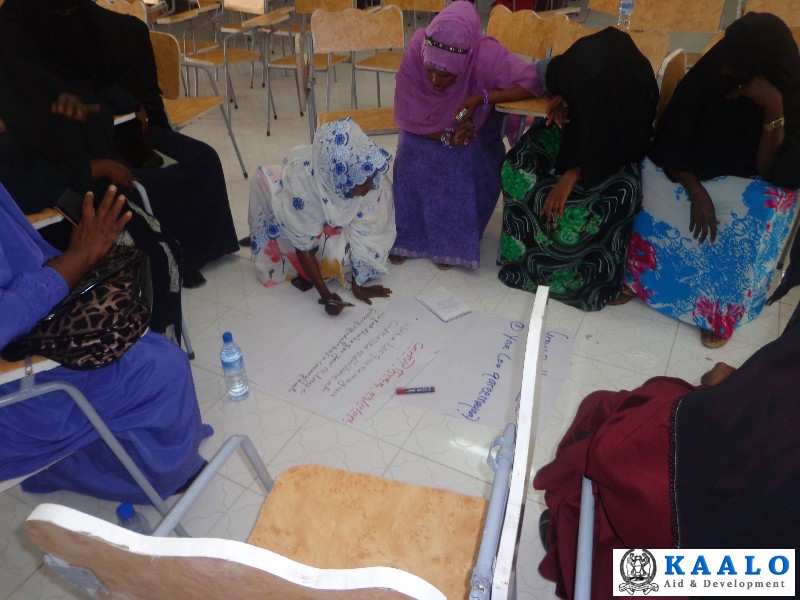 No problems were encountered in the process of conducting Awareness workshop

Participants, requesting feedback, and noting down remarks and opinions expressed.

Accepted, and the vast majority of people they engage with are opposed to FGM and

Recognize the harm it causes.

However, opinions on less severe forms of FGM, often referred to as ‘sunnah’

(Implying that this practice is religiously prescribed), are harder to influence. The

Health risks of these forms of FGM are less obvious, and the perceived religious and

Cultural roots of the practice make older people in particular less willing to reject it.

Levels of awareness about the Nugaal region, with further work

Required in all areas.

A number of interesting   people have emerged which allow the voices of affected Women to emerge and speak out about FGM. Over Time, all Trainers women and men (including religious leaders) and young People have found that their confidence to speak out about FGM has increased.

The capacity of community in the villages to work on this issue has grown, though it has done so unevenly.  And even us project workers’ confidence has increased simply Through their everyday workshop in the community, and through the positive feedback we have received   successful events during workshop on we have provided structure training to communities networking and coordination has strengthened considerable across Nugaal region and even all over punt land, at end of the workshop everyone was happy as shown. 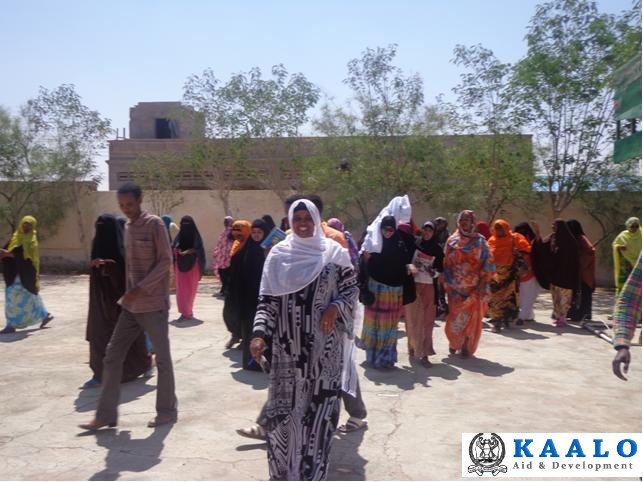 No changes and adjustment of whatsoever was made.

No need for additional budget adjustments

8. Coordination with others, External Relations (attach records in Appendix)

The security situation of the project target location is conducive and there are no foreseen threats in the project implementation process.

Status for objectives and indicators

Comparison of planned and actual accomplishment

·         Capacity building for community leaders to advocate against FGM