REPORT OF WORKSHOP ON POSITIVE INTERACTION BETWEEEN THE POLICE AND CIVILIANS IN BOSASSO, GARDO AND GALKAYO 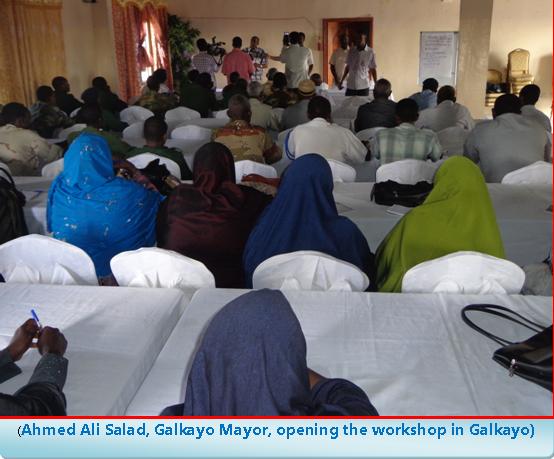 Since the collapse of the central government in 1991, Somalia has been subject to widespread violence, clan conflict and instability. This prolonged clan or group conflict led to the rise of Al-shabab, a radical Islamist movement which still maintains control some southern parts of Somalia and mountainous areas of Puntland where they launch guerilla attacks to the main towns, particularly Bosasso and act sporadic killings in the other main towns in Puntland. Puntland is a region located in north-eastern Somalia, with capital of Garowe in which leaders in 1998 declared it to be an autonomous state.  There is a huge threat of Al-shabab terror group and sea piracy to Puntland security which has great impact on stability of the horn. Criminal groups conduct kidnapping for ransom and piracy. The judicial system which is foundation of governance includes the police, the courts, and prisons are very weak. Therefore, there is great need for support to law enforcement institutions. There was also mistrust between the police and civilians that encouraged all crime actors to dare carryout missions such as killings, robbery, rape and all human rights violations.

KAALO, who is a partner of DIAKONIA held Workshops on positive interaction between the police and civilians in the towns of Bosasso, Gardo, and Galkayo which are aimed at improving the relationships between police and the public, a relationship that is currently widespread with distrust. The police were panelists in workshops, making presentation about the work they do, how it affects the public and the challenges they face.  The discussion result understanding between the police and the civilians and agreed to improve their working relationship.

The workshops resulted understanding and acceptance between the police and civilians with establishment of committees working for trust building and creation of positive environment allowing the two parts to work together to ensuring the security.

KAALO held a workshop of this type in Garowe last year 2012 in which its impact has currently reflected from ensuring the security of Garowe town. Very positive interaction between the police and civilians created and cooperation between the two sides on crime combating get to the highest level.

Civilians participated in the workshops were selected from the communities with the consultation and recommendations of the elders, local authorities, women organizations and other prominent figures in the communities. The members from the police were selected with the approval of their higher ranking officers.

Objectives of the workshops

Workshops opening remarks began with greetings, verses from Holly Quran recited by one of the participants, then introductions, after that KAALO’s facilitators took the floor to explain the objectives of the workshop, funded agency, sponsored agency and implementing agency. This photo below shows Noor Shire, the facilitator explaining importance of the workshops for the security and stability of Puntland which demands for the police and civilians work together prior to the creation of positive and friendly working environment.  After stating these explanations the facilitator gave the floor to the government authority that was opening the workshop.

Mr. Hassan Abddalla, Bosasso Mayor who was invited to open the workshop but had been busy and was not able to participate in opening ceremony but phoned the facilitators and participants encouraging them to give great consideration to understanding the objectives and aims of the workshop in which he said that he was very pleased with the workshop topics of “positive interaction between the police and civilians”.  The Mayor said that Bosasso is multicultural town where many and different crimes take place every day which are difficult for the police to control without the support of the people, so he urged the people to take part in keeping the security of the town.

Mr. Mohamed Said Hoggamolaror, Gardo mayor opened workshop. In his opening remarks he stressed the importance of the workshop to civilians and police to getting them to work together for ensuring security of the town.  He said that this type of workshop had never been conducted in Gardo and hoped its outcomes would lead the creation of trust building between the police and civilians then the security of the town will be improved.

Mr. Ahmed Ali Salad, the mayor of Galkayo town opened the workshop. He colorfully spoke the magnitude and significant of the workshop for the security of the town which is the main issue of the people. He said that Galkayo is one of most vulnerable town in Puntland regarding security and peace.  Mr. Salad said lot of different crime cases take place in Galkayo every day. Killings, kidnappings, robbery and rape are most common crimes that happen in Galkayo.  He hopped that this workshop will help to ensure the security of the town as the police and civilians support each other in crime combating .

The three Mayors thanked to SIDA, DIKONIA and KAALO for funding, endorsing and implementing the project respectively. They requested to get more projects on positive interaction

Since the objectives of the project were to build confidence and trust between the police and civilians by establishing a positive and friendly environment that allows the civilians and the police to work together, it was important to explore the perception of one to another. The police and the civilians were asked to present their perceptions towards the other.

Civilians’ perception towards the police

The police do not respect the people; they turn their back when we call them to help us. They hate us, they are enemy.

·         They are corrupt and bribe takers, they are part of the security problems

·         The police torture prisoners and make abuses  against the people both if they are in prison or in the streets;

·         The police detain the people illegally, and there are prisoners who have never been taken to a court since they were arrested, they meet no lawyers or legal get support;

·         The police rape women in the prisons and take part in raping girls outside of the prisons like other gangs and gunmen.

·         The police do not carrying out their duties at all, they are just stick in the offices or at corners of streets for bribe collection or supporting thieves and robbers to get share.

·         The police make power abuses when they are in the offices and they give special security services who offer them some money or khat (stimulant chewed green leaves).

·         The police do not know anything about the law or the country constitution, their recruitment is based on clan militias, therefore they are not real police but legitimized gangs.

·         When you call the police for help they do not come to you or crime site immediately, they come late and when the perpetrators ran away, therefore they do not want to come to face to face with wrong doers because they are friends.

·         No one from the public wants to report and  inform the police any case they have come across, because the police publicly tell the names of people who give them information, they Lack of secret keeping, therefore this puts the informer into risk;

·         Police do not listen to when the people try to report them problems;

·         They release detained suspects in return of money.

·         There is no working relationship within the police, they do not respect each other, and there is a lack of obedience among the police members.