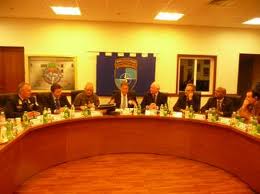 Ahead of the Brussels Conference, national and international civil society reflect on

progress towards a New Deal for Somalia – August 2013

A. The Federal Government of Somalia, the EU and other donors should, by recommitting to

the process and principles of the New Deal process, be explicit that the document to be

assessment and other processes.

B. The Brussels meeting should establish a realistic and patient timetable for New Deal

implementation to ensure sufficient buy‐in across Somalia. This time‐frame should be

worked out with relevant stakeholders, and the implementation of each objective under the

PSGs should be phased, starting with inclusive dialogue to refine the proposed plans.

between regional leaders, inclusive fragility assessment, endorsement of one vision and

national plan, and the development of a final compact should be built into the timetable as

well as a schedule for the development of detailed plans to implement these processes.

D. Donors have a key role to play in encouraging inclusivity, participation and engagement and

should provide support to the range of Somali actors, including civil society, to be able to

achieve this. Donors should provide accountability towards this end.

E. Ahead of the Brussels conference, the Federal Government should work with civil society

public on the New Deal process.

F. Civil Society should be an integral part of the post‐Brussels work, including engagement and

active leadership as Co‐Chairs in all committees that will be established after Brussels, taking

In July 2013, the Federal Government and the EU announced they would be co‐hosting “The New

Deal for Somalia Conference” in Brussels on 16 September 2013. The conference is intended to

partners to a set of key priorities” for the reconstruction of Somalia over the next three years.

some of the ground breaking work done. For instance the formation of the High level Task Force was

the first of its kind in the New Deal Implementation process. The fact that the team included CSOs is

itself commendable. The initial decision to have ten consultations, one per region was a step in the

right direction. We also commend the government for timely response to concerns raised by CSOs

during the HLTF meetings and for their assurance that CSOs would be engaged.

However, as the process moved on, civil‐society has become increasingly concerned that there is an

attempt to not only rush the process, but to replace meaningful engagement with society with token

participation of CSOs and regions in New Deal events.

August, we have reservations in some of the core areas that are foundational to peacebuilding and

As the Brussels conference approaches, civil society at all levels is concerned about significant

deviations from the spirit and requirements of the New Deal process, especially the apparent rush

Somali people, and which has so far failed in engaging the broadest range of Somali society. While

these concerns are significant, the New Deal process still represents a great opportunity for Somali

people to direct and control their own future and emergence from fragility. We believe there are

three main concerns with the process; failure to adhere to the spirit and requirements of the New

Deal process, a lack of regional participation and buy‐in into the process, and a lack of public

inclusion and consultation, and based on this, we are offering constructive recommendations ahead

of the Brussels conference to address these concerns.

Adhere to the spirit and requirements of the New Deal process

The inception of the New Deal in Somalia has been marked with confusion, inadequate transparency

and very limited inclusion. Whilst there is an understandable and welcome desire to finalise a formal

New Deal compact for Somalia, pressure to progress has outpaced the ability of the Federal

Government to engage effectively with all actors, and to ensure that fundamental aspects of the

completion of the fragility assessment to underpin its content, and without the development of a

context specific peacebuilding vision and plan, together with specific objectives, and indicators to

uphold them – all of which should be based on an inclusive fragility assessment process. Fragility

assessment is the foundation of the New Deal, allowing all social groups to participate in the

sub‐national plans – to move the country towards peace, resilience and development. Inclusive

in that context through legitimate processes that enjoy cross‐societal buy‐in. The lessons of past

efforts within Somalia show all too clearly the crucial importance of inclusion in the Somali context.

By ensuring the views and needs of all social groups are taken into account, a shared compact on

Somalia can contribute to broadly and democratically owned peace. Overlooking the fragility

on legitimate politics which emphasises the inclusivity of political dialogue.In this light, participants

is responsive to the special importance of inclusion in Somalia, rather than predetermining the

2. Ensure the participation of all regions of Somalia

The New Deal offers a framework for an inclusive peace process. This means that the different

regions and regional authorities must be involved in the process, embracing the New Deal as a

forum in which inclusive discussions can take place.

However, to date, the process has been dominated by the Federal Government and its interests.

While civil society has set out an ambitious agenda to involve counterparts from across the country,

it has not been equipped with the time or resources necessary to do this, nor has international civil

society had sufficient time and information to offer the right assistance. The Federal Government

has attempted to reach out to some authorities, including Puntland and Galmudug. However, these

compact development process. Inclusive participation is mandated for every stage of the New Deal,

not just the fragility assessment. Furthermore, there has been no regional representation in the

groups developing the compact text, nor any regional participation in key meetings including the

August 2013 retreat in Naivasha organised by the EU.

As a result, the reaction of some regions has been to reject participation, risking the legitimacy of

the entire process. Such rejection at the political level is likely to be echoed in society at large. The

Federal Government, with the support of the EU as the lead donor in the New Deal process, should

relationships and further political reconciliation and agreement. Deepening dialogue and

across Somalia as a whole. Without this, the New Deal could risk undermining national reconciliation

in its commitment to build states which meet the needs and fulfil the rights of their people. The

government to be legitimate and representative of their aspirations and needs. The failure to

the very purpose of the New Deal. Most importantly in undermines the Monrovia Road Map and its

related PSG Number 1 (inclusive and legitimate Political processes), the foundations on which the

By progressing towards a compact in Brussels based on existing strategies and plans, primarily

owned by a set of Federal Government actors and with limited input from the broader Somali public;

Somalia’s New Deal process risks failure. There must be genuine outreach to and participation of the

widest possible range of Somali people, including urban and rural populations, the internally

displaced, diaspora and refugees and asylum seekers, as well as men and women, the youth and

engage people in the process. Consulting with civil society is not enough.

Neither is engagement. Civil Society must be given an opportunity to mobilize and engage broader

society, not just having their opinions expressed in meetings. This is the only way to allow them as

CSOs to work with and consult Somalia’s people. People need to understand what the New Deal is,

what the process offers and have a chance to input into what their priorities and needs are.

of repeated state and peacebuilding efforts in the country which have engaged limited stakeholders,

are relevant only to the limited areas of the country, and ultimately fail.

Somalia. But national and international civil society remain concerned that the process has been

substantially flawed and rushed, compromising the legitimacy and content of any announcements in

Brussels. This threatens the implementation of the New Deal as the process may not enjoy full

in Somalia or donors.

Despite these challenges, civil society organisations in Somalia remain confident that the New Deal

presents great opportunities for the Somali people, and are willing and ready to work with the

reality for all people in Somalia.

Save the Children Somalia programme