{Mr. Gumbe, Diakonia Program officer speaking to the participants}      {Director General of Public Work explaining there is a lack of land law and land policy}

The Review on legal and regulatory framework on assets/property programme was aimed to document the property ownership system that is in existence in Puntland. KAALO conducted 8workshops in four main towns of Puntland (Bosasso, Garowe, Gardo and Galkayo). The system was discussed at community level bringing together internally displaced persons (IDP), clan elders, community representatives, local nongovernmental organizations, international nongovernmental organizations, local authorities, and media and private sector representatives.  In the discussion representatives stated the preferable future of property ownership in Puntland.

Government (in the form of several ministries) was available in these discussions to provide the government position on the issue. In addition to that documentation, disseminations and follow ups of the proceeding workshops were carried out. Though legal and regulatory framework on property/asset rights was discussed in the workshops in general, giving great consideration and responding to requests from local and government authorities workshops put particular focus on land issues chiefly land-grabbing which causes daily conflicts and clashes in either between individuals or sub clans. It was realized that one of the leadings of conflicts and clan disputes in Puntland are land-grabbing and illegal claiming public property.

Each workshop targeted 60 participants, that means the number of beneficiaries was 480 people from different categories of the community.

The table below shows in summary the locations, number of participants, type of beneficiaries and dates that the activities were carried out. .

Kaalo carried out preliminary meetings with local authorities aimed to get their acceptance and other preparations necessary to the workshop were made. Workshops were opened with verses from Holy Quran; opening remarks were made by officers from local authorities. Self introduction by the participants and registration were also done. The participants liked the workshops and said that they had idea and had platform. 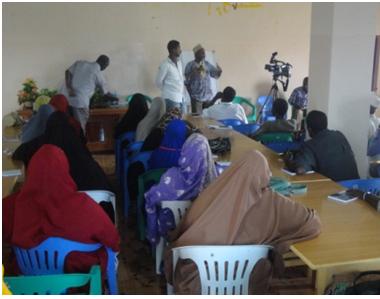 there is no single miter of land that is in the hands of the government. The government officers who delivered speeches included the Director General of Ministry of Public, Mr. Abdulkadir Sh. Mohamud. In his remarks he said that the Ministry has struggled to develop land law and land policy but it has not achieved that yet. Mohamud Ali (Gumbe) was among other people that have raised questions on problems of land grabbing and illegal claiming public property.

Mr. Mohamud Ali Gumbe, Diakonia programme officer explaining what the landgrabbers reason their land ownership as : “ I saw it, I demarked and owned it, it is my property”.  Participants added to that there is no one looking after the public property or even people are supposed to protect them are taking part in the lootings.

Facilitators used to begin sessions with telling the participants enjoying stories to created positive atmosphere and capture the minds and ears of the participants.  So the participants were encouraged to show full participation. This was mainly discussions and debates between the participants on legal and regulatory framework on asset/property rights by highlighting the main points of the subject including identification of the problems, causes and solutions.

The participants identified the main problem as land-grabbing which is wide spread in Puntland and identical in all Puntland districts. The rights for those land-grabbers to capturing public land and illegally claiming ownership is very distressed. They finger pointed that the main causes of this problem are lack of land law and land policy and incapability or weak governance in Puntland. The participants highlighted factors supporting to land-grabbing that are wide spread of unemployment, arms in the hand of the people, poor administration, high level of corruption and business creation in landgrabbing .

Impact of landgrabbing has negative impact to the community that created enmity, insecurity, conflict and clashes between clans or individuals. It also has impact on town plan causing no land for public purpose such as schools, hospitals, streets, play grounds, mosques and land over price.  it is involved many different categories of the community such business people, unemployed armed groups, sea pirates, Diaspora, traditional elders, local governments and government figures have also involved land-grabbing directly or indirectly.

Participants suggested solutions to the problem that are the government is to develop land law and land policy and execution with effective law enforcement institution. Government should commit to defend public property and be accountable to its people. Public awareness campaign on stopping land-grabbing is also very important.

Institutions and figures that can play roles to solving the problems

People and institutions that can play role for solving the problem of public land-grabbing include Local government, Ministry of Public work, Ministry for Security and Ministry for interior and local government,  Ministry for justice, members of the parliament, traditional elder, religious scholars, media people, women and youth group, NGOs, CSOs, and CBOs.

Participant of each town established a  committee that were assigned to deal with all property rights concerned parts giving priority to put pressure on the government to take steps to protecting public property and  formulation of policies and legal frameworks on property rights  giving main concern  to land law and land policy formulation. 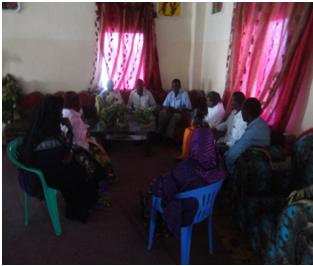 One of the committees setting their work plan and discussing the steps they are going to take. They are agreed that the job is very difficult and the main  threat to the security is that the people are armed and strongly defending what they illegally claiming as their property.

Duties and responsibilities of the established committees include to Lobby and influence government officers and members of the parliament to formation of land law and land policy and effective implementation with the commitment of the government to defending the public property; They are to advocate for returning back the public property (land)  into the hands of the government, while the government is to keep its responsibilities for bringing  justice, equality and empowering law enforcement institutions. The committees are assigned to conduct meetings with all concerned parts such as mayors, Ministers of the public, security, interior Ministry, Ministry of wildlife. The committee will mobilize peaceful public demonstrations against illegal claiming public land and land grabbing. The committee will conduct radio and TV debates on land-grabbing for all concerned parts including decision-makers particularly government officers and civil society members, such as lawyers and other knowledgeable figures.  Participants had stressed root problem, causes and solution to the problem.

Causes; among the causes of land grabbing that participants stated are:

Solution to the problems

For the bad ambition, the participants said the solution is:  Rule of law, justice, awareness, isolating the land grabbers.

For the ignorance participants said solution is: Awareness, free education, teaching the Islamic religion, telling the people the crimes of land grabbing in terms of Islamic law.

For the weak government participants said solution is: establishment of good government which is able to carry out its duties problem and issue  land law and land policy, public awareness and collect arm from the people, and accomplish justice and equality, return  land ownership into the hands of the government;

For the lack of faith: Learn and practice Islamic religion which respects property right and prohibits land grabbing or robbery, hold meetings and speeches on proper culture and religion awareness make by religious and traditional leaders, tell the people that the land is a public property

For uncultured behavior: public awareness on good culture, implementation of rule of law, isolation of land grabbers and buyers.

Duties and responsibilities of the committees

Duties and responsibilities of the established committee