People are in dire need of food, clean drinking water and shelter

Nairobi November 29 2013 – Over 100,000 people devastated by the recent cyclone in Somalia are in urgent need of humanitarian assistance, aid agencies report. The tropical cyclone that hit the Puntland region of Somalia earlier this month resulted in the death of at least 80 people, mostly children and the elderly, and is estimated to have killed more than 100,000 livestock. Pastoralist communities appear the hardest hit.

Information from affected communities was initially limited due to the remoteness of the worst affected areas. Communication was halted from the lack of electricity to charge mobile phones, which was the only method of communication. Initial assessments indicate there is an urgent need to provide food, clean drinking water, shelter and medical supplies. Families have lost their homes and possessions as floods damaged entire villages, roads and fishing boats. Fears are also emerging of an outbreak of diarrhea and other waterborne diseases as many water sources were destroyed, while others are at risk of contamination from dead livestock. 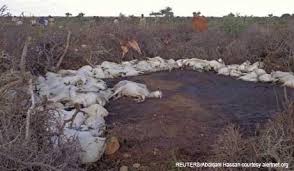 Adeso’s Executive Director Degan Ali called this a silent crisis that needs to be addressed urgently. “For the pastoralist communities, the loss of their livestock could lead to an even greater number of people dying. Livestock is the basis of the local economy and their only means of survival. We, therefore, must respond quickly with more humanitarian aid but also recovery efforts to help restore livelihoods. ” she said.

NGOs in Somalia have been working with Puntland authorities and UN agencies through daily coordination meetings to determine how best to respond to save lives. To date, aid agencies have distributed food, water treatment tablets, shelter material and provided medical services. Puntland authorities have also created a bypass on the damaged Garowe/Dangoroyo road, facilitating the delivery of supplies to an estimated 30,000 people.

The storm has hit vulnerable communities who were still recovering from the 2011-2012 Horn of Africa famine and drought. With over 65 percent of the population relying on pastoralism to earn a living, the huge livestock deaths could have long-term negative consequences. Beyond their immediate needs for food, water, medicine and shelter, families will need support to rebuild lost livelihoods including restocking of livestock. Displaced families will require new shelter or relocation in the long-term, and coastal communities will need assistance to replace lost fishing equipment.

“We appeal to the international community for more assistance to respond to this disaster. While agencies are responding to other much bigger crises that have greater media visibility around the world, we must remember the plight of the most vulnerable children and families in Somalia,” says World Vision Somalia Country Director, Francois Batalingaya.

The signatory agencies are:

Save the Children International